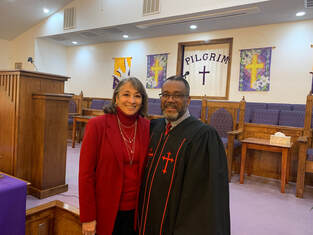 God blessed in both ministries: extensive building projects at both churches, enhanced youth outreach programs, after school tutorial program (Cedar Point), and the securing of the churches 501(C)3 which allowed them to further support the Jaycees Burn Center, The Ronald McDonald House and The American Cancer Society.

Rev. Jones is married to Antoinette O. Jones.  They were blessed with one son, Gabriel; wife Hanna Bass Jones, and two grandchildren; Bryer and Emmalynn.

He grew up in Mingle Hill Disciples of Christ Church in Salemburg.  It was there that he was introduced to the Scriptures and the foundation was laid that would ultimately lead him to a personal relationship with the Lord Jesus Christ.