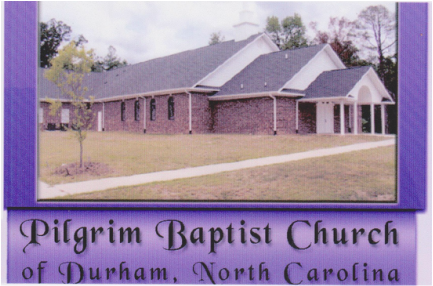 A building formerly known as “The Third Fork Inn” was purchased through united efforts for $5000.00.  Services began in May 1947.  During this first month of service, people sometimes visited the church thinking it was still a roadhouse, but found worshippers of Christ.  Some of these people became members of the church.

By June 1947, under the leadership of Reverend William Tolbert the first Pastor, eighteen members had joined.  Reverend Tolbert remained Pastor through September 1949.

In October 1949, Reverend Willie T. Thornton became Pastor of Pilgrim Baptist Church, and remained until his death in September 1992.  There was a steady growth of membership as families in the neighborhood joined the church.  Under the leadership of Reverend Thornton, the many families became one united in Christ, and in purpose.

As the church grew, services were shared at, and with other church congregations.  Pilgrim Baptist Church joined Durham Missionary Baptist Association.  The church building was expanded and remodeled to include inside plumbing and a fellowship hall, with kitchen, in the basement.  Spiritual leadership grew and was evidence.

Under the seeding of his ministry, the Church harvested an increase in membership, finance, and spirit.  Through his full-gospel ministry of preaching, teaching, and leadership, spiritual growth was evidence in the Church Body.  Deacons and Ministers were added.  Reverend Davis also expanded the church’s ministry to reach others via way of radio and television broadcast called “Power of the Word” Ministry.

Under Pastor Davis’ leadership, the church also regained its financial stability and was able to purchase property for a new church site, and build a 500 seating church with classrooms, fellowship hall, kitchen, offices, and library.  The purchase was made solely with tithes, offerings, donations, and pledges.

Many new ministries and activities to reach souls have been birthed under the leadership of Pastor Dennis Davis.  Pilgrim Baptist is a church under God’s directions and God’s will.

God is continuing to bless and expand the ministry of Pilgrim Baptist Church.  In 2007 Pilgrim established a sister church in the city of Oxford, North Carolina.

Reverend Bobby Laws was installed as the pastor.  Pastor Laws served as an associate minister under Pastor Dennis Davis for many years.  He was saved as a teenager in 1990.  During the years leading up to his ordination and appointment as pastor, he served faithfully at Pilgrim in Durham.

Reverend Laws held positions as a youth leader, member of the Pastor’s Aid Society, and also a member, and past president, of the Youth and Adult Choir.  God has shown Himself strong in the life of Pastor Laws over the years.  Today, he leads the congregation of Pilgrim Baptist Church of Oxford (PBO).  They are dedicated to the same preaching of the Word of God as Pilgrim Baptist of Durham.
Former Pastor Rev. Dennis G. Davis

​Pastor Davis accepted Christ as Lord and Savior in 1971 in Bridgeport Connecticut.  In 1972 he married his high school sweetheart, Sylvia Carraway.  Three children were born from this union: Crystal, Sean, and Melissa.

In 1977, Pastor Davis answered the call into the ministry.  He established Victory Deliverance Center Freewill Baptist Church and pastored there for three years.

In 1981, God began to put it in his heart to move to North Carolina.  With his young family, Pastor Davis arrived in Durham, North Carolina, where he attended Shaw University Divinity School.

After visiting several area churches, he felt led to join Pilgrim Baptist Church where he served as an associate minister from 1984 to 1991 under the leadership of the late Rev. Willie Thornton.  He became the assistant pastor in 1991.  In September 1992, Rev. Thornton went home to be with the Lord.  Rev. Davis was installed as senior pastor and went about the business of continuing to build the ministry.

Armed with nothing but a burning desire to see lost souls come to Christ, Pastor Davis continued to work in the ministry, putting emphasis on salvation and balance.  He believes that Christ should be in charge of every area of our lives, and that His love and grace should be shown in our homes, marriages, and church.

The church grew spiritually and financially under Pastor Davis’ leadership, and in 2005, the members were blessed to walk into their brand-new 500 seat sanctuary. Though many things have changed over the years, one thing has not.  When you walk through the doors of Pilgrim, you can still feel the love of God that has brought us to where we are today.